-To collaborate with big data technologies and create new value-

Open source access is driving innovation in emerging technologies such as Big Data and the Internet of Things. The release of software as open source stimulates value creation, as it can be tweaked and improved by the open source community, and used in collaboration with other software.

In developing its GridDB high scale database, Toshiba opted for the open source model for GridDB in order to encourage collaboration with other open source software, such as Apache Hadoop. Toshiba has also launched a commercial version of GridDB for users who want support from Toshiba.

GridDB is designed to meet the needs for infrastructure IoT systems to process enormous volumes of data at high speed and reliably. It is used in such areas as energy management systems.

GridDB belongs to In-Memory Database. Using memory, GridDB accesses enormous volume of data at high velocity.GridDB takes data stored in a hard-disk and, using an in-memory architecture deployed in the main memory of a server is able to access petabyte levels of data at high speed.

GridDB has a scale-out architecture that allows the number of servers to be built out to handle larger volumes of data. In the commercial version of GridDB, without stopping the system, user can vary the capacity by adding or removing hardware.

GridDB replicates data automatically in a clustered system, eliminating the risk of a single point of failure.

More details of GridDB and access to the GridDB OSS community are here (Japanese only)
https://griddb.net/en/ 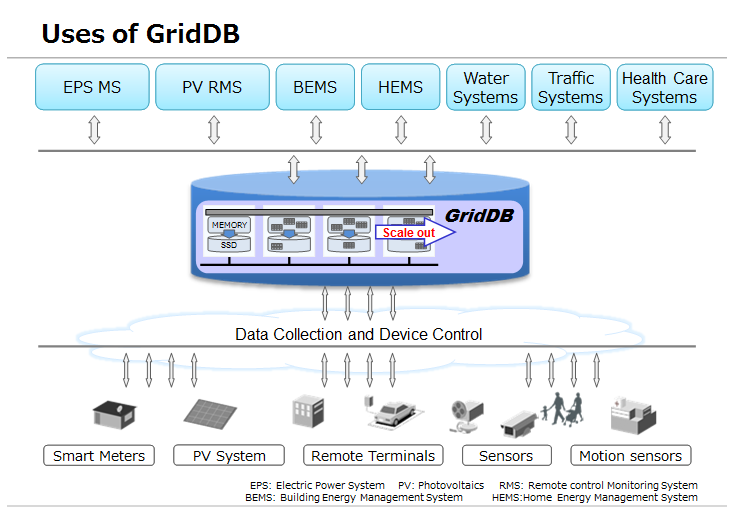