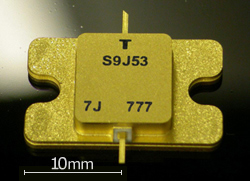 TOKYO - Toshiba Corporation today announced that it has developed a gallium nitride (GaN) power field effect transistor (FET) for the Ku-band (12GHz to 18GHz) frequency range that achieves an output power of 65.4W at 14.5GHz, the highest level of performance yet reported at this frequency band. The main application of the new transistor will be in base stations for satellite microwave communications, which carry high-capacity signals, including high-definition broadcasts. Toshiba plans to start sample shipment of the new power FET by the end of 2007 and to go into mass production by the end of March 2008.

The new power FET has a high electron mobility transistor (HEMT) structure that Toshiba has optimized for the Ku-band. The company replaced source wire bonding with via hole technology*1 to reduce parasitic inductance, and also improved overall design of the matching circuit for practical application at Ku-band frequencies.

Demand for GaN power FET for radars and satellite microwave communications base stations is growing steadily, both for new equipment and replacement of electron tubes. Toshiba will meet this demand with early commercialization of its new Ku-band power FET.

Full details of the new GaN power FET will be presented at the European Microwave Conference 2007, in Munich, Germany from October 8 to 12.

Toshiba has taken the lead in applying GaN technology to power FET for microwave frequency applications. The company directed its initial efforts to the development and marketing of power FET for the 6GHz band (2005) and 9.5GHz (2006) band, and developed devices that achieved the worlds highest output power at those frequencies. The company has now extended its line-up to 14.5GHz. Toshiba will continue development for the18GHz to 30GHz frequencies (Ka-band) and beyond.

This table can be scrolled horizontally.